High-impact resources to help you grow relationships with clients and prospects.

Sages of Aging is a public television documentary that has been curated and hosted by Ken Dychtwald, PhD, acclaimed author, Age Wave CEO, and longevity expert.

Dychtwald was fascinated by the concept of an “ethical” will. As people reach their later years, they often contemplate creating a “material will,” encompassing the “things” they owned and how they wanted them distributed to their children and/or future generations. However, even more important, was one’s “ethical will,” where individuals were encouraged to capture the key lessons they have learned that they wanted to pass on to future generations.

Many extraordinary men and women who have been working for decades in the fields of aging were now either retired or retiring. These experts are a truly diverse group, both in terms of personal backgrounds, ethnicities, and sexual identity and also in terms of ideas, career paths and leadership styles.

Thanks to the proliferation of Zoom, Dr. Dychtwald, in partnership with the American Society on Aging and 37 other organizations and associations, hosted a series of twelve extraordinary interviews with the most diverse set of legendary pathfinders:

Sponsored by the American Society on Aging and Edward Jones and presented by American Public Television, this documentary is a priceless distillation of the twelve most innovative and impassioned “sages” in the fields of aging, longevity, health, medicine, law, equity, social services and government policy. Tune in to hear their candid views, personal journeys, core lessons learned, keys to impactful change-making, and the transforming roles of individuals, families, communities, and government. See how it can change your future!

Sages of Aging premieres nationally across the US on October 1, 2022.  Check your local listings for show times.

For more information about the twelve sages of aging; visit https://www.asaging.org/legacy-interviews 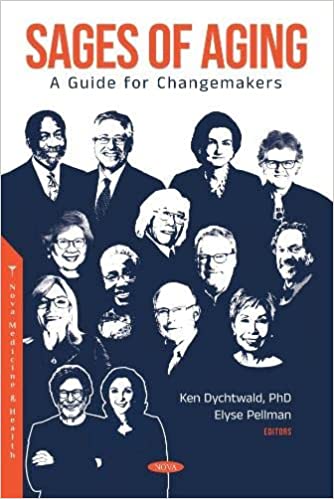 Buy this book
Scroll to top