Sages of Aging: A Guide for Changemakers gathers the breadth of deep knowledge, years of experience, and untold lessons learned from twelve pioneers who collectively forged today’s aging field and related services.

Based on the concept of an “ethical will,” Dr. Ken Dychtwald hosted a series of twelve unique and evergreen interviews with a prominent and diverse set of leading pathfinders in the fields of aging:

Illuminated with captivating stories, this book, Sages of Aging: A Guide for Changemakers, encapsulates their candid views on the “sages” personal journeys, core lessons learned, keys to impactful change-making, and how they envision transforming the roles of individuals, families, communities, and government, and for that matter, the entire field of aging. This book will be interesting to readers young and old, as we all must come to terms with our aging and the legacies we choose to leave behind, and it has the potential to change readers’ views on the future of their studies, their work, and their lives.

Only logged in customers who have purchased this product may leave a review.

Radical Curiosity: One Man’s Search for Cosmic Magic and a Purposeful... 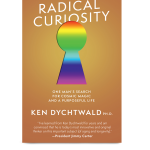